The Pros and Cons of Electric Cars 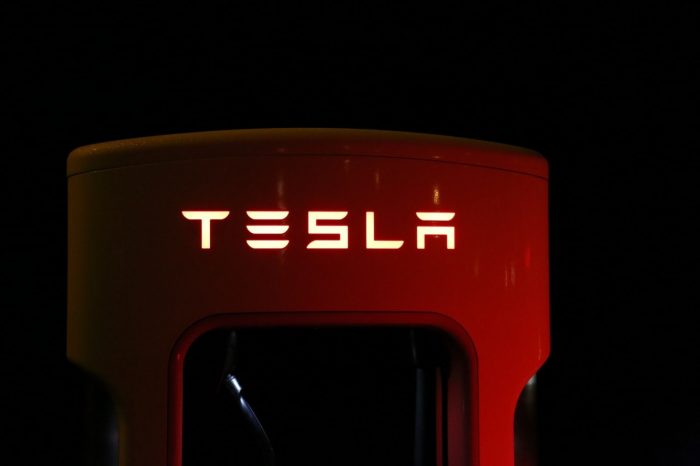 Ethical consumerism is becoming quite the phenomenon as of late. Increasingly, consumers want to invest their money in something that is not going to endanger the environment and other people. According to a recent survey by CHOICE, Australia’s leading consumer advocacy group, 73% of their members indicated that they believe buying environmentally friendly products where they can is important. A further 87% believe quality is more important than price, and 70% are interested in ethical products and claims.

This shift in ethical consumerism can be seen in Australian consumers’ shift towards owning electric and hybrid cars. What better way to protect the planet than to switch to an environmentally-friendly car? The electric car, though not entirely run without emissions, is a much more environmentally-friendly choice of vehicle, compared to the standard combustion engine. In their 2018 report, ClimateWorks Australia found that there has been a global increase (56%) in the sale of electric cars. Unfortunately, Australia still trails behind in the shift towards electric, despite having an increase in the uptake of electric and hybrid over 2017 to 2018 (67% increase).

The ClimateWorks report found that in combination with climate change being frequently on the media agenda, increasing petrol prices, decreasing electric battery costs, and cheaper car models of electric and hybrid vehicles have facilitated this shift. Each year, the number of models available also becomes higher. In 2016, there were only 16 models of electric cars available. This jumped to 23 in 2017, and has continued to rise. That being said, it should be noted that 19 of these 23 cars are priced at over $60,000. So, going electric will cost you a significant amount upfront, but will save you money on petrol in the long run.

On a positive note, it is expected that the cost of electric and hybrid vehicles will continue to decrease as Australia aims to fulfil its commitment to the Paris Agreement, vowing to reduce emission to 26-28% by 2030.

Looking for an electric car under 60k right now? They do exist! Here are the four best models under the 60k mark that are powerful, economical, and most importantly (we think), better for the planet. Have a click-through and check out all the special features included. They may be eco-friendly, but that doesn’t mean they can’t be super lux.

Electric cars use electricity – and we know electricity is (currently) generated by fossil fuels which is not eco-friendly, so electric cars aren’t exactly GOOD for the environment. Not until Australia invests in renewable energy, anyway. However, they are much better than the conventional petrol-powered car.

According to ClimateWorks Australia, electric cars that are charged by the electrical grid produce less carbon emissions than an average internal combustion engine. So, eventually, when Australia’s energy source becomes 100% reviewable, electric cars will become zero emission vehicles. Better times are ahead!

Not only are emissions reduced instantly by switching your car to electric, your spending on fuel is greatly minimised. According to Electric Vehicle Council, the average Australian consumer can save over $1500 a year on petrol by switching to driving an electric car. In fact, per litre, petrol powered cars can cost around $1.50 on average (and let’s face it, that’s on a good day in Queensland). For an electric car, you will be paying around $0.33 per E-litre. That’s 78% less than the average cost of petrol. This of course varies depending on the make and model of your car. To narrow down how much you’ll actually save, the Electric Vehicle council also provide a cost calculator where you can compare you own car to an electric vehicle.

The obvious downside is that electric cars will cost you a fair chunk of money immediately. It’s no secret that going green can be a bit pricey. However, electric cars are an investment. In Australia in particular, electric cars have become a luxury of sorts. This is mainly because electric cars are still rather new technology, so the more expensive, well-established brands have been more proactive in investing in this technology and developing new models.

Another obvious downside is the limited number of models available in Australia. Petrol powered cars currently outrank electric cars by a mile (sorry, kilometre). However, considering there were fewer than 5 electric cars available in 2012, there has been substantial growth.

Another drawback is the lack of infrastructure that has been developed to assist drivers of electric vehicles. There are only 17 charging stations located across QLD, so if you’re buckling in for the long-haul, you’ll need to plan ahead to find charging points. Of course, electric cars can also be charged at your own home, which is how most drivers recharge their electric cars.

Something consumers may also find frustrating is the amount of time needed to charge an electric car. Depending on how much of the battery is depleted, and how much power your car’s battery holds, charging can take 20 minutes to 20 hours. And you thought charging your phone took forever!

Obviously, as we’ve touched on, electric cars are better for the environment compared to traditional combustion engines, and they cost a lot less to run. Another added benefit is the greatly discounted cost of maintenance. This is because electric cars contain batteries which last longer than average car batteries. Also, as petrol powered engines contain more parts that can deteriorate or malfunction and a bunch of fluids that constantly need replenishing, they need frequent maintenance and changes. This isn’t the case for electric cars. Does going electric kind of sound enticing right now?

Considering making the switch? Scroll on to learn about some of the hot new electric models on (or about to enter) the market.

What models are available?

For a thorough list of electric cars currently available, the Electric Vehicle Council provide a comprehensive list of electric car models available in Australia. Fortunately, there are some new and exciting electric and hybrid models that are emerging in 2019, and even more excitingly, some of them are under the $60k mark.

So, without further adieu, here’s our list of electric and hybrid cars to look out for in 2019. 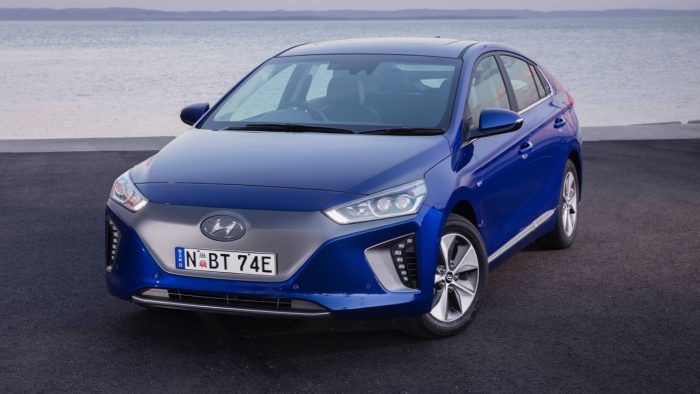 Hyundai is undoubtedly leading the game in its production of electric cars for the common consumer – thanks, Hyundai! The Ioniq is one of its electric models ready for purchase in 2019. In one single drive without charging, the Ioniq travels 230km. The total charge time for this beast is 4 hours and 25 minutes. However, with a 100kW DC fast charger, you can smash out 80% of its battery in just 25 minutes. Being electric, the Ioniq creeps around streets almost silently and uses regenerative braking to save you even more power. How thoughtful. 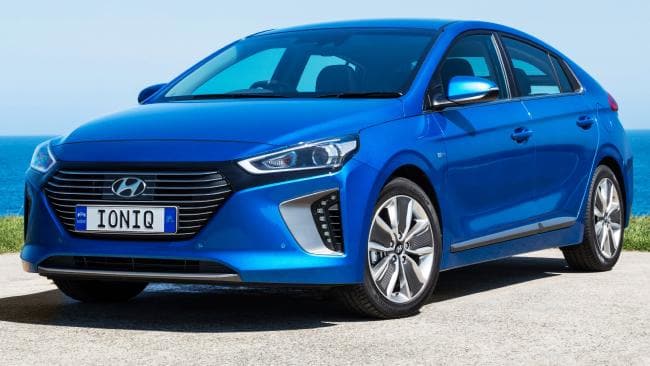 The Ioniq Plug-In Hybrid offers you the choice of driving using solely electric power, or switching to hybrid to maintain charge. Depending on your driving needs, you can switch between these modes. Going for a long drive and don’t have time to charge? Go hybrid. Fully charged and wanting to save on fuel? Go electric. It’s up to you. Your Ioniq Plug-In Hybrid will also sense when you’re running low on charge and switch you over automatically. This one takes a little less time to charge too as it contains fewer cells – only 2 hours and 15 minutes. 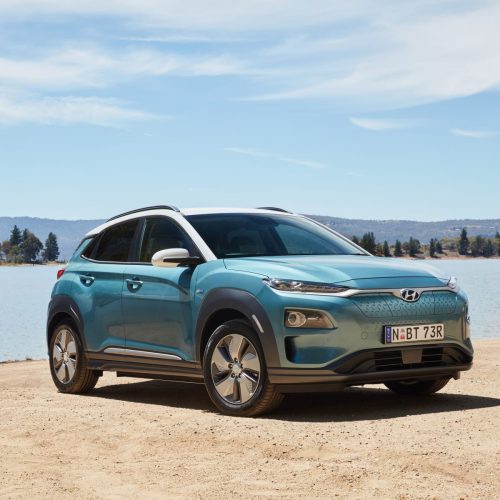 Ok, so this one fall a little above the 60k mark, but you’re also getting a little more car. The Hyundai Kona Electric is Australia’s first 100% electric small SUV. In addition to the peace of mind knowing you’re doing your part for the environment, you get a whole bunch of extra space to pack your camping gear, or shopping bags, or dogs, or you know, anything. Using a DC fast charger, this model can power up to 80% in just under an hour – it’s a bigger car, so it does take more time. However, to help make your life a little easier and to provide you with even more convenience, you can schedule your Kona to charge at night during off-peak hours to save on electricity costs. Oh, and don’t let the colour throw you off, Hyundai offers 12 colour options for this model. 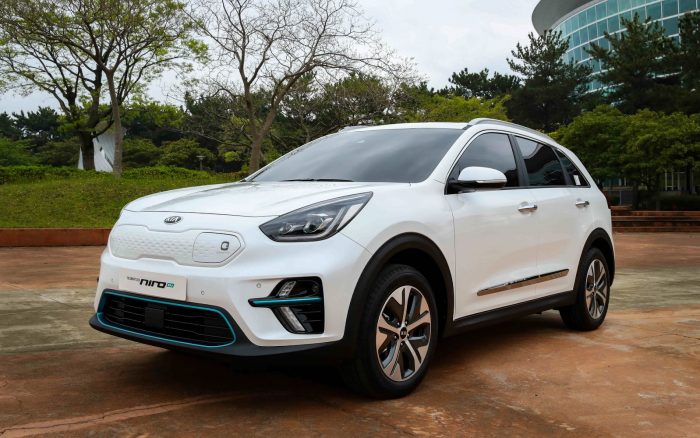 Price: to be announced.

The Kia Niro EV is yet to grace our shores as Kia has had to revise some claims; however, it is rumoured to be the most cost-effective electric car in its category – knocking the Hyundai Kona off its throne. So, we’re going to assume pretty close to that 60k mark. The Niro EV will also come with some very lux features like interior mood lighting, high-gloss blue or black trim around the doors, and a 7.0-inch touchscreen display which shows you nearby charging stations and gives you battery percentage updates. But wait, there’s more. The Niro EV runs a staggering 455 kilometres on a single charge, and even longer on urban trips where its waste-energy capturing system works best. Using a DC fast charger, you can get the Niro up to 80% in 42 minutes. Not bad, eh? The Kia Niro EV is set to be released this year, so keep your eye out! 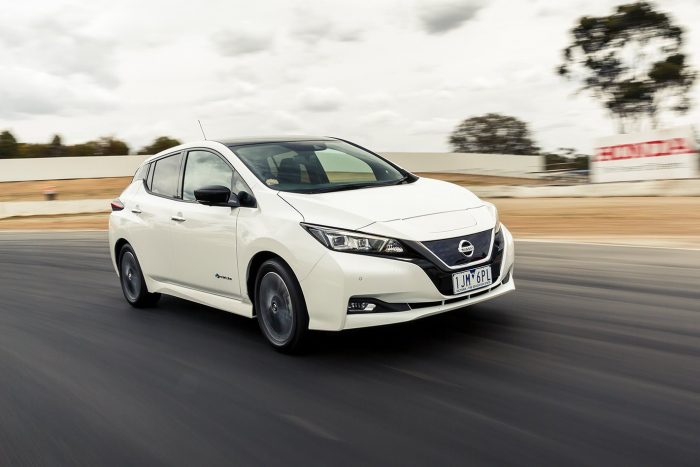 The Nissan Leaf has not yet been released in Australia but you can certainly pre-order this bad boy right now. The Leaf provides a 270 kilometre driving range on a single charge, which is better than most cars its size. Charging using the DC fast charger, the Leaf does take 60 minutes to power up to 80% which is slightly longer than its counterparts. Much like our other electric models, the Leaf also comes with the latest tech and safety features, making your car feel very futuristic and fun to drive.

The End of The Road

So, really there are a lot of pros when it comes to choosing to switch to an electric car. If you already own one, good for you! Otherwise, I’m sure some of you might be planning one for your next car.

If you’ve got the budget for it, you should definitely consider purchasing an electric or hybrid car. If now is not exactly the right time, not to worry! Each year more and more electric models are released – newer designs, newer technologies, and better price points. The future of electric cars is looking bright.

Novus Autoglass service all cars – electric, hybrid and petrol-powered. Has your windscreen been looking a little worse for wear? Time to get into contact with one of our friendly Novus specialists.