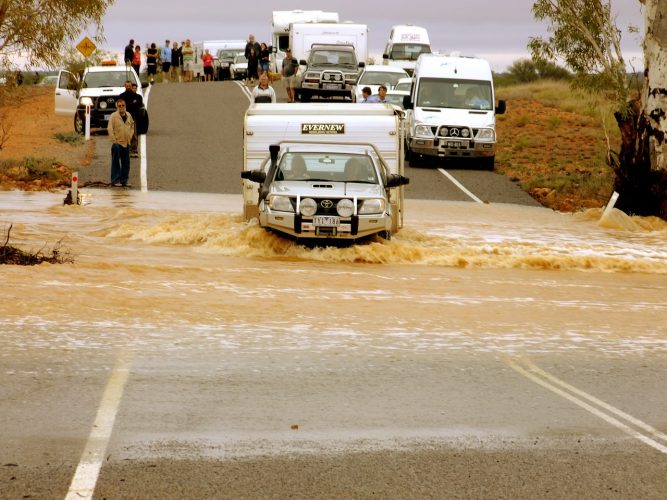 Aussies enjoy a diverse and often unpredictable climate across our vast states and territories. We experience sleet, fog, snow, hail, tyre-melting-windscreen-cracking heat, cyclones, mini-tornado’s, dust storms, electrical storms, and relentless torrential rain. When you’re on the road during any of these events it can be frightening; but nothing renders you quite as helpless as being caught in your vehicle in rising floodwaters – which often occurs with barely any warning. So buckle your seatbelt as we discuss the best way to react on the road if you ever find yourself caught in this terrifying situation.

How does flash flooding occur?

Floods are common throughout Australia, costing us up to 400 million in damage annually. Generally flash floods are triggered by bursts of intense heavy rainfall causing water to rise in rivers and catchments over a period of days, or even minutes. Drainage systems struggle to keep up with the relentless flow of water and rapid flooding can result in any low lying area. This can make it very difficult for authorities to issue timely warnings to urban areas which may be affected by flash flooding. Once a river has broken its banks, rising waters find their way over the roads and into our suburban streets. Typically flood waters will dissipate within a matter of days; but that’s little consolation for those whose homes are inundated, and who may be trapped on the road in their vehicle. 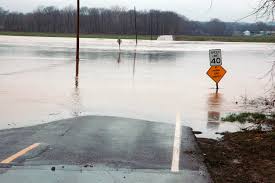 What are the dangers?

No other natural disaster takes more lives in Australia than flooding. Flood water moves fast and with great force. As little as six inches of water can halt most vehicles, even 4WD’s and trucks, or render you unable to control your car. Two feet of water is enough to actually sweep your car off the road. People often underestimate the power of floodwater and it’s all too common for some to try and ‘make a run for it’ through water covering the road. It’s for this reason that most flood-related fatalities occur while people are caught in their vehicles. Even if the water looks shallow, there’s no way of knowing the condition of the road underneath, which could be washed out in sections, and easily trap your vehicle.

Despite all the warnings, many people still try to drive through flood waters. In 2017 NSW Acting Commissioner Greg Newton told SME, “There has been a significant increase in flood rescues, with 550 calls in the past year.

“A large percentage of those are cars. On the weekend of the big east coast low we had 300 flood rescues in a three-day period and over 200 were from cars. Tragically in at least two cases lives were lost,” he said.

“People don’t actually understand the risk. The stories people tell themselves include: ‘The other car made it through, so can I’; ‘There is traffic behind me so I have to keep going.’

“People are not understanding how little water is required to make a modern vehicle float.” 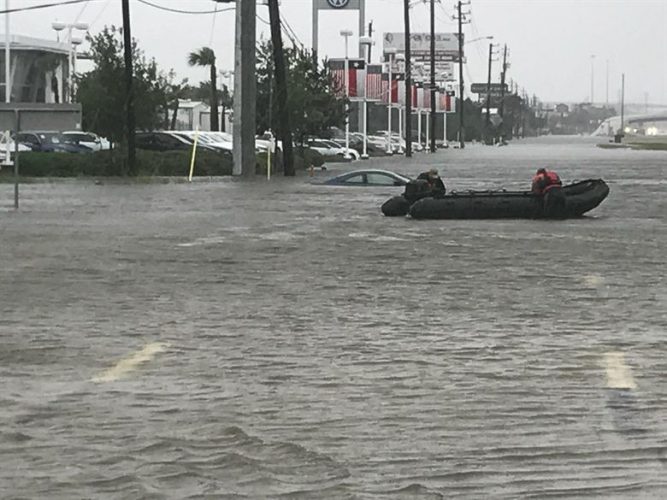 Do’s and don’ts if you’re going under

If you’re facing flood water in your vehicle, turn around and try to find a safer route towards higher ground. If you’re surrounded by water, turn on your headlights and hazard lights and try to remain calm as you take the following steps:

I know this sounds terrifying; but it happens so often and so quickly, it’s best to be prepared for the worst.

Survivor of the 2011 Grantham floods that killed 12 people, Helen Besley, 69, told a royal commission-style inquiry in the Queensland rural town of Gatton, “It’s eerie. It was scary.And it was sort of numbing because you think: ‘how? How does this happen?’ We’re on a flat plain on a farm. We just thought ‘well where did all this water come from’?”

“It was a big wave of water that just swamped over the car. I can’t describe it — it was just a shock,’’ she told the inquiry.

“The wave of water came from the west. The water picked us up and dumped us over a barbed wire fence in a paddock next door which was a part our property. We didn’t realise this at the time as we were in shock.”

More of Helen’s harrowing story in the Australian.

Eight year old Chloe tells of her escape from her mother’s sinking car in Northern NSW as the vehicle plunged into the flooded Tweed river following Cyclone Debbie in 2017. Her mother and two siblings did not survive.

Damage caused by flood to infrastructure, crops, livestock, vehicles and properties is extensive and very traumatic for victims. If you live in an area susceptible to extreme weather events, it’s best to check your insurance policies to ensure you’re covered for damage by floodwater.

Some policies only cover damage caused by rainwater rather than flood water. If you drive through flood waters, you may void your vehicle insurance and even be fined (if you were lucky enough to survive).

Sometimes it’s unavoidable; but often-times it is. We hope everyone heeds to the “if it’s flooded forget it” motto. Be prepared, and stay safe in our beautiful; but volatile Aussie.

Novus Auto Glass are the windscreen repair experts. Specialising in windscreen fixing, windscreen replacements, glass restoration and other services, Novus can help you get back on the road. Call 13 22 34 to bring Novus to your door.